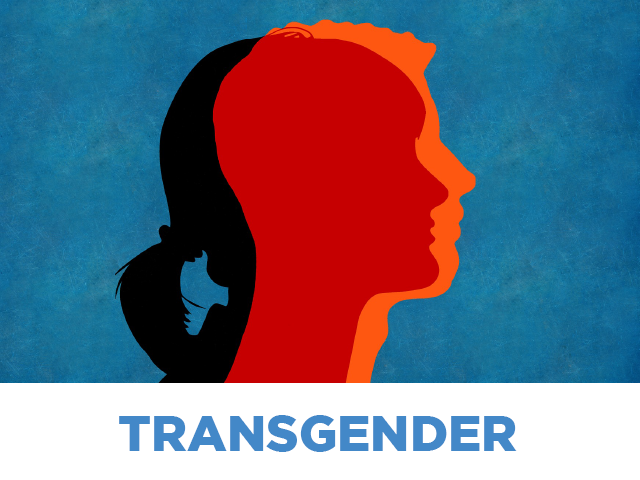 Can I become female if I was born male?

Your biological sex is determined by your genes, from the moment of your conception.  It's coded in your DNA.  XX means female.  XY means male.  You cannot have your chromosomes changed from XX to XY or vice versa.

A very small number of people may have some male and female sexual characteristics.  They are intersex.  But they will still regard themselves as either male or female.  Intersex is a diagnosable, externally observable and well-characterised medical condition.

Some people say they believe they have been 'born in the wrong body'.  But you cannot separate your mind from your body - the brain influences the body and vice versa.   The belief that the mind and body can be separated has its roots in the ancient heresy of gnosticism.

What is the issue?

Sex-change operations are not necessarily new; the first occurred in 1953 (Christine Jorgensen). But more and more people are seeking such operations now. This has forced Catholic and Christian institutions to address the morality of sex-change operations since such actions may become part of mandatory insurance coverage, or employment in Catholic schools, or legislative mandates requiring Catholic hospitals to perform such procedures.

What is a sex-change operation?

A typical sex-change operation is two-pronged. First, the person undergoes rather extensive psychological testing. Then he or she is placed on a hormonal regimen, and then, he or she undergoes surgery where the (original) genitalia are removed and replaced with the desired genitalia. In the case of a male-to-female surgery, for example, the penis is removed along with the testicles and in their place a make-shift vagina is constructed. For a female-to-male operation the woman undergoes a hysterectomy and mastectomy and a non-functional penis is constructed and attached. A sex-change operation invariably renders the person infertile. It should be noted that the hormonal regimen continues the rest of the person’s life so that the secondary sexual characteristics can be maintained, e.g., a higher or lower voice, the presence of absence of facial hair, etc.

A sex-change operation should be distinguished from certain procedures performed on sexually ambiguous persons, for example, those suffering from congenital adrenal hyperplasia (a species of which is anrdogen insensitivity syndrome), mosaicism, chimerism, or some other congenital cause of mixed sexual identity. These disorders present ambiguous sexual identity and certain operations done to confirm a person in the “dominant” sex aims to correct a pathological condition. Such operations should not be thought of as changing a person’s sex, but rather confirming what is originally ambiguous.

What is immoral about a sex-change operation?

Properly understood, a person cannot change his or her sexual identity. For persons not suffering the disorders mentioned above (e.g., hermaphroditism) a person is either male or female. A person is the unity of soul and body, and ‘soul’ should be understood not as an immaterial self, but as that which makes the body be what it is, namely, a human person. We are either male or female persons, and nothing can change that. A person can mutilate his or her genitals, but cannot change his or her sex. Changing one’s sex is fundamentally impossible; these procedures are fundamentally acts of mutilation.

Mutilation results in a person being rendered impotent or sterile and dependent for the rest of one’s life on a hormonal regimen which makes one appear to be other than what he or she is. There is nothing wrong with the genitalia of persons seeking such operations. But they are removed in order to conform to the person’s subjective belief about who he or she wants to be. Doing violence to one’s body when there is nothing wrong with it is an unjustifiable mutilation. Furthermore, seeking such a mutilation manifests a self-hatred inconsistent with the charity we owe to ourselves. Persons seeking such operations are clearly uncomfortable with who they really are. Loving such persons properly demands addressing the beliefs and self-understanding that give rise to this fundamental rejection of self.

Are not these arguments “physicalist” in that they say that changing one’s biology is immoral?

Two clarifications are worth noting: first, one cannot change one’s sex. A person can change what genitalia they have, but not one’s sex. Receiving hormones of the opposite sex and removing genitalia are not sufficient to change one’s sex. Sexual identity is not reducible to hormonal levels or genitalia but is an objective fact rooted in the specific nature of the person. Second, what makes genital-changing operations immoral is that the person’s body is being mutilated. We should no more respect a person’s wish to become a cyborg by cutting off his limbs and replacing them with prosthetics than respecting a person’s wish to become a different sex by cutting off and morphing his genitalia.

The moral judgment that genital-changing operations are immoral does not entail that people cannot have false beliefs, or that their feelings and attitudes cannot be irrational or not in conformity with reality. A person’s sex identity is not determined by one’s subjective beliefs, desires or feelings. It is a function of his or her nature. Just as there are geometrical givens in a geometrical proof, sexual identity is an ontological given. Psycho-therapy and loving acceptance of such persons suffering from sexual identity confusion is the proper way to love them. Mutilating their bodies is not.

What is the Difference between Sex and Gender?

Sexual identity is not a social construction but is an objective fact rooted in our nature as either female or male persons. The most obvious fact about us is that we are either male or female.

Of course there is an important distinction to make in this regard between sexual identity and gender. Sexual identity refers to the property of being male or female. It refers to the specific sex of the human person. Being male (or female) is an essential property of who we are as persons. For example, a man simply cannot as a male, bear or gestate children. Men do not have such a potency, but women do. Thus, being male (or female) is essential to what we are. Gender, on the other hand, refers to certain emotional dispositions or traits characteristic of femininity or masculinity. ‘Femininity’ and ‘masculinity’ are gender terms and refer to specific traits or dispositions. A male can have feminine-like characteristics; in fact, male psycho-therapists have many feminine characteristics such as listening, nurturing and so forth, but remain sexually male. Female police officers or military personnel have many masculine-like characteristics but remain sexually female. So, while there is nothing intrinsically wrong with trying to acquire certain characteristics or traits available to any human person, it is wrong to mutilate one’s body as one’s sexual identity cannot be changed. Seeking such an operation manifests a dislike and disrespect for who one is fundamentally.

Does not the position outlined above put too much emphasis on the body and not on the person’s mind – i.e., on what the person believes and feels? Some may think that when the state of one’s mind does not match up with one’s body, why defer to the body? Why let the body dictate what one’s sexual identity is and not one’s mind?

These questions are important and bring us to the heart of the issue. It is granted and well accepted that a person’s self – the constellation of beliefs, desires, emotional dispositions and character traits – constitute someone’s self-image and self-understanding. But it should also be granted that not all of our beliefs, desires, and self-understanding conform to the truth. Our reasoning capabilities, memory and even basic sensation such as visual perception can err and give rise to false beliefs. The response we take in those cases is to correct the false beliefs. When our self understands something false about us, this needs to be corrected as well, not acceded to.

To answer the questions directly, those who hold this position assume a dualism between mind and body. Properly understood, persons are either male or female. The body (of the person) is a fundamental indication of what sex we belong to. It is a physical, empirically verifiable reality that does not change simply because our beliefs or desires do. Once the dualism behind the question is rejected, and one recognizes that our sex is indicated by our bodies, we can see that sexual identity is an objective, readily discernible fact about us. As some philosophers put it, we are bodies.

What seems to happen in these cases of mutilating surgeries is that the individual attempts to capitulate to the emotional disorder through surgical means rather than addressing it as what it truly is, a psychological disorder.

Medical science acknowledges that your organs are also 'sexed'.  That is why in transplant surgery people who receive organs from someone of the same sex typically do better than if they received organs from the opposite sex.